What Is Nai Roshni Scheme? 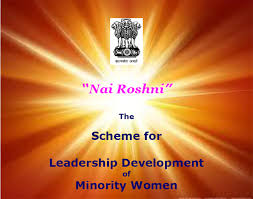 This scheme is one of the best schemes introduced by the Government of India so far, as the objective of this scheme is really helpful and is the need of the hour. This scheme literally encourages the females, belonging to the minority categories to come up and stand up on their own for their rights. This will also help to eradicate one of the main problems of our country, i.e. poverty. It will help the females to learn new skills and techniques and work on their own, without being dependant on anyone else.

What Are The Objectives Of The Nai Roshni Scheme?

The objectives of the scheme are mentioned below:

What Are The Training Modules Under The Nai Roshni Scheme?

The training modules under this scheme are mentioned below-

What Issues Does The Nai Roshni Scheme Resolve?

Following are the issues that are resolved by this Scheme:

What Are The Target Groups of The Nai Roshni Scheme?

The following are the target groups of the Scheme: –

✅ How many minorities are there in the country?

The Ministry of Minority Affairs has described the following communities as minorities in India:

✅ What is the main objective of this Scheme?

The main objective of the scheme is to provide placements to rural youth.

✅ What is the issue resolved by this Scheme?

It focuses to encourage minority females to move outside their households and accept leadership roles.