The key features of the Mahindra Kuv100 Car Loan are as follows:

The eligibility criteria to avail of a Mahindra Kuv100 Car Loan is given below:

Many banks offer different car loans; the best method for understanding a loan is the Car Loan EMI calculator, which helps borrowers calculate the specific monthly cost they will have to bear for the length of the loan. To measure the EMI value to be stated to the loan receiver, almost all banks use the same basic formula.

Suppose an applicant meets all of the eligibility criteria of the Mahindra Kuv100 Car Loan. In that case, the loan provider will require the applicant to send some necessary paperwork before the loan can be disbursed to verify his statements and satisfy some of the specific norms of loan provision. The essential documents are: 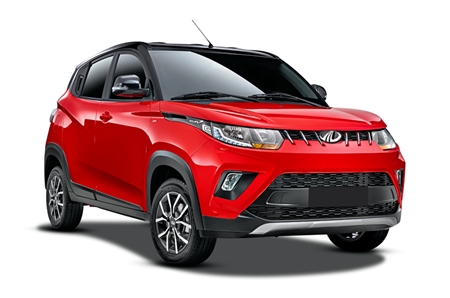 Mahindra has released a new NXT sequence for the KUV100. It comes in five different variations, two engine choices, and eight colour schemes, including two dual-tone procedures. In addition, Mahindra has loaded the KUV with features and technology to ensure that it has the firepower to compete with the segment’s top-quality players.

Other safety features include

How to get Mahindra KUV100 Car Loan

Dialabank, India’s First Financial Helpline, is the quickest way to get a car loan for a Mahindra KUV100. Customers who are involved will save time and money as a result of this. To apply for a loan, please go to www.dialabank.com. Dialabank can also be reached by calling 9878981166.

Mahindra offers the KUV100 NXT BS6 only in four variants: K2+, K4+, K6+, and K8. As a result, it loses out on its diesel engine option. The BS6 upgrade has hiked prices uniformly by Rs 22,000 across all variants. It is still powered by the 1.2-litre petrol engine (82PS/115Nm) and comes mated to a 5-speed manual gearbox. Mahindra has priced the cross-hatchback in the range of Rs 5.54 lakh to Rs 7.15 lakh (ex-showroom Delhi).

Mahindra has confirmed that its smallest passenger vehicle, the KUV100 NXT, will do away with a diesel engine sometime in the future in the wake of BS6 emission norms kicking in from April 2020. The carmaker has also announced that all other diesel engines will be available after BS6 criteria are applied. The engine in question, the 1.2-litre, 3-cylinder mFalcon D75 turbocharged diesel motor that churns out 79PS along with 190Nm, was first introduced on the KUV100.

✅ What is the Mahindra KUV100 NXT average?

According to the manufacturer, the average mileage of the Mahindra KUV100 NXT as checked is 18.15 kmpl.

✅ What does the Mahindra KUV100 NXT’s monthly fuel cost?

The cost of fuel for any car is determined by its use and driving style. For example, assume you travel an average distance of 100 kilometres a day. Based on an average mileage of 18.15 kmpl, the fuel costs for a Mahindra KUV100 NXT should be Rs.12235.

✅ What is the power of the Mahindra KUV100 NXT’s fuel tank?