Candidates must meet certain requirements in order to obtain a Mahindra TUV300 Car Loan, which includes:

Because it allows applicants to determine the precise monthly payment they will have to make throughout the life of their credit, the EMI calculator for the Mahindra TUV300 Car Loan is the most crucial tool for understanding a loan.

It enables applicants to calculate how much they will be required to pay each month throughout the duration of their loan term.

Depending on the approach employed, the EMI for a Mahindra TUV300 Car loan is computed differently.

EMI debts are the most prevalent type of debt repayment, which comprises paying a sliding scale of interest on the outstanding loan amount at or after the end of each month.

In essence, all the loan provider use the underlying formula to calculate any loan EMI.

The monthly payment, often known as an EMI, is denoted by the letter E.

The principal amount for which you desire to apply is denoted by the letter P.

the monthly interest rate expressed as a proportion of annual revenue denoted by the letter R;

The loan period is expressed in the Number of months denoted by the letter n.

Like any other loan, a Mahindra TUV300 car loan includes certain hidden expenses that the borrower must meet in order for the loan to be approved. The costs are as follows:

Before a Mahindra TUV300 Car loan is provided, if an application fulfils all of the loan’s eligibility conditions, the applicant will be requested to present supporting documentation to prove his claims as well as fulfil certain credit and legal criteria. The following documents are required: 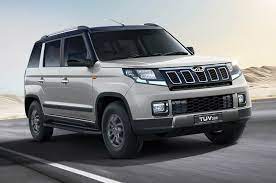 The Mahindra TUV300 was introduced by Mahindra & Mahindra on September 10th, 2015, and was constructed by the business in August of the same year. It’s a subcompact SUV with seating for seven people.

It has a 3-cylinder turbocharged diesel engine that gets 18.49 kilometres per litre. Mystic copper, Bold black, Pearl white, Highway red, and Majestic silver are among the five colours offered for the Mahindra TUV300.

TUV300 is available in seven different configurations that areT4 Plus, T8, T6 Plus, T10, T10 (O), T10 Dual Tone, and T10 (O) Dual Tone. The subcompact SUV features a 384-litre cargo area. TUV300’s centre row may be folded without a split. The split-folding back seat would have improved the car’s overall appearance and made it more capacious.

The car provides a smooth and pleasant ride for its passengers, making it excellent for highway travel and city driving. It is powered by the mHawk80, a three-cylinder turbocharged diesel engine.

The Mahindra TUV300 gets 60 per cent better mileage than comparable SUV or SUV sub-compact automobiles.

In the Indian mid-size SUV vehicle segment, Mahindra TUV300 is a newly introduced car; it attracts customers looking for an SUV with all the modern features and is made by Mahindra that are the expert manufacturers of SUV class vehicles.

Mahindra TUV300 Car Loan is an opportunity that enhances the affordability of a new service car for a large number of regular earners that wish to own a Mahindra TUV300.

Mahindra & Mahindra Limited, based in Mumbai, Maharashtra, India, is an Indian multinational automobile manufacturing firm. It began as Muhammad & Mahindra in 1945 and was subsequently renamed Mahindra and Mahindra. It is one of India’s major vehicle manufacturers by production and the world’s largest tractor maker. It is a subsidiary of the Mahindra Group, a conglomerate based in India.

It was rated 17th on Fortune India 500’s list of leading companies in India in 2018. Maruti Suzuki and Tata Motors are two of its main competitors in India.

Mahindra TUV300 is a new car by Mahindra as they in recent years have started a new segment of personal use and feature-packed SUVs.

How to get Mahindra TUV300 Car Loan

Customers seeking a mid-size SUV from a respected vehicle manufacturer might consider the Mahindra TUV300. All banks and non-bank financial organisations may find themselves unable to fund the car’s worth for their consumers.

Dialabank, India’s First Financial Helpline, is the quickest and most convenient option for potential consumers to apply for a Mahindra TUV300 Car Loan, saving them time and effort.

To find the best car loan for all kinds of four-wheelers, visit the Dialabank website.

In the photographs, the new Mahindra TUV300 is shown with partial camouflage, most of which is put to the front region of the SUV, hinting that it would receive a facelift.

Images of the revised Mahindra TUV300, which is BS6 compliant, have leaked online, and this time we get a better look at the subcompact SUV. The TUV300 is the only car in Mahindra’s lineup that has yet to comply with BS6 emission requirements, and it’s probable that it may be released this year. In comparison to the more luxurious Mahindra XUV300, the TUV300 has been more of a utilitarian sub-4 metre SUV, based on the traditional ladder-on-frame chassis.

Several Mahindra test mules were sighted roaming the outskirts of Chennai in 2019. While several are next-generation vehicles, such as the Scorpio and XUV500, others will be upgraded just to comply with forthcoming emission regulations. A test mule for the next-generation TUV300 Plus has also been discovered. Given that Mahindra has said that the vehicle would not be phased out, it appears that the Indian manufacturer has begun testing it with a BS6 compliant engine.

✅ What is the Mahindra TUV300’s On-Road and Ex-Showroom Price?

✅ What is the Mahindra TUV300’s mileage?

✅ Is the Mahindra TUV300 a reliable vehicle?

Mahindra has just released the first mid-life makeover for the TUV300, according to analysts. We had the opportunity to spend a whole day with it, and this is what we have to say about the 2019 Mahindra TUV300 facelift.

✅ What is Mahindra TUV300’s seating capacity?

The Mahindra TUV300 can accommodate up to seven passengers.

✅ What are the most popular Mahindra TUV300 variants?

The Mahindra TUV300 is available in seven different models. The most popular are the T6 Plus, T4 Plus, and T10 100HP.

✅ Between the TUV300 and the Marazzo, which is the superior car?

TUV300 begins at Rs. 8.54 lakh (ex-showroom), while Marazzos start at Rs. 10.35 lakh (ex-showroom). Get a thorough comparison of the TUV300 and the Marazzo based on their characteristics, mileage, pricing, and other factors.