What Is Deep Ocean Mission?

The Deep Ocean Mission was launched by the Government of India as an initiative in order to undertake the deep ocean exploration that is focussed on the continental shelf and economic zones of the country. This program comprises different unmanned and manned submersibles exploring the sea bed. 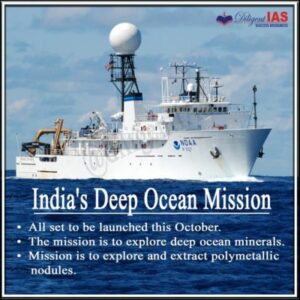 The main aim of this mission is to extract and explore the polymetallic nodules and is comprised of different minerals like nickel, magnesium, copper, cobalt and iron hydroxide. These metals are used in the manufacturing of smartphones, electronic devices, solar panels and batteries. This plan will enable the country to develop the capabilities in order to exploit the resources in the CIOB (Central Indian Ocean Basin).

The country has been allocated a site of 29,000 sq metres in the Central Indian Ocean Basin by the ISA (International Seabed Authority) in order to explore the polymetallic nodules from the seabed. The estimated amount of the polymetallic nodules in the area of 92.59 million tonnes of manganese and 4.7 million tonnes of copper. Also, the estimated cost of this mission is around Rs. 4077 crores for a time period of 5 years.

What Is The Background Of The Deep Ocean Mission?

The study of the Indian ocean started when the Government of India sponsored the program on the PMN (Polymetallic nodules) that are initiated with the help of collections of the samples from the Arabian sea. The ISA (International Seabed Authority) is nothing complex but is an autonomous international organisation that was established under the United Nations Convention on the Law of the Sea in the year 1982.

India is the first country that received the status of ‘ Pioneer Investor’ in the year 1987 and an area of 1.5 lakh sq km in the CIOB (Central Indian Ocean Basin) for the exploration of deep-sea minerals, the polymetallic nodules in the Central Indian Ocean Basin. In the year 2002, India has signed a contract with the ISA, and after the complete analysis of the resources of the seabed, 50% was surrendered and India thus, retained an area of around 75,000 sq km. The country has an Exclusive Economic Zone allocated around 2,2200,000 sq km and that area is completely unutilised and unexplored.

What Are The Objectives Of The Deep Ocean Mission?

Following are the main objectives of the Deep Ocean Mission:

What Is The Impact Of The Deep Ocean Mission On The Natural Environment?

A major concern has been witnessed regarding the Ocean mining that is being conducted in different countries. The major concern that is seen is that this area is unexplored and therefore, the repercussions cannot be assumed as to what can happen

Another cause of concern is that the sediment plumes might have formed after the practice of mining and the oil spills may also be caused. The country, however, seems to be positive with the research as the major revelations that can be done once the research gets started and the mission takes off. The most important fact is that the temperature at deep depths of the Indian ocean is very low and different species will be discovered too which might be capable to survive in extreme conditions.

✅ What are the Polymetallic Nodules?

The PMN or Polymetallic Nodules are the iron-manganese oxide deposits that are porous and potato size.

✅ Why is the Deep Ocean Mission important?

This mission aims to translate research into product development and industrial applications.

✅ Which is the nodal ministry of the Deep Ocean Mission?

The nodal ministry of the Deep Ocean Mission is MoES (Ministry of Earth Sciences).