What is meant by it?

GST includes Integrated Goods and Services Tax (IGST), which is a tax levied on all interstate supplies of goods or services and is charged on all supplies of goods and services, whether they are imported into India or exported from India. 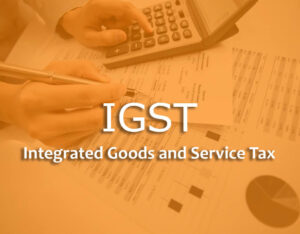 What is the purpose of IGST?

IGST is a mechanism for monitoring inter-state commerce in goods and services and ensuring that the SGST component accrues to the consumer state. It would preserve the integrity of the Input Tax Credit (ITC) chain in interstate shipments.

What are the advantages of IGST?

(a) Continuity of the ITC chain on inter-State transactions. For the inter-State seller or buyer, no upfront tax payment or massive blockage of funds is possible.

(b) There is no refund in the exporting state since ITC is used in paying tax.

What is IGST? Give an example?

Taxes on goods and services moving from one state to another are levied. IGST, for example, is imposed on products moving from Tamil Nadu to Kerala. State and federal governments split the IGST money according to the rates set by the authorities.

What are the features of IGST?

IGST has the following features:

Who is responsible for collecting the IGST (Income Tax)?

What is an IGST refund?

Importers can apply to get their refunds of the importer’s GST. Export-related documentation, such as the shipping bill, should be submitted through the Indian Customs Electronic Commerce Gateway (ICEGATE). On the GST portal, the export GST refund process continues with Form GSTR-1.

How do I claim IGST?

In what way does the IGST formula differ from the GST formula?

Numerically, the combined goods and service tax, or IGST, is equal to the sum of CGST and SGST. The IGST will be applied to products moving from New Delhi to Agra.

Where do CGST and IGST differ?

✅ It’s important to know whether or not the import tax (IGST) can be claimed back?

You can claim back the CGST, IGT, and SGST you paid on imports.

✅ What is the IGST rate on imports?

The rate is set at 10% of the value of the products being purchased. The IGST is levied on all imports into India and is applied to all goods imported into the country. On the whole value of imported goods, IGST is levied plus any customs levy. Additional to the usual GST taxes, the GST Compensation Cess (GSTCC) is a levy.

✅ Can we claim IGST on custom duty?

No, only basic customs duties will be exempted. However, such imports will be subject to IGST. To compensate for the IGST, the importer can claim an input tax credit or a refund in compliance with the terms of the CGST Act, 2017 and its rules.