When you plan to file an income tax return for the year, check if all of your income is on the income tax exemption list. The tax department would not be allowed to take away its customary share from it if it did. The government offers tax-free income to provide benefits to a certain essential section of the country. Any of the tax-exempt sales are listed below.

When you plan on filing an income tax return for the year, check if all of your income is on the income tax exemption list. The tax department would not be allowed to take away its customary share from it if it did. These tax-free income earners are essential to national growth and prosperity, such as farmers and agriculturalists are the providers of food for the nation.  Any of the tax-exempt sales are listed below. 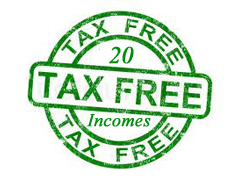 Under section 56(ii) of the Tax-free Income, income tax on gifts earned by a person or HUF is regulated. Tax-free Income on gifts obtained in the following situations shall be exempted:

Gifts obtained from families: Gifts received from relatives are exempted in full from income tax. The income tax department’s list of relatives is issued, which includes an individual’s spouse, brother, or sister, the ascendant. The importance of gifts obtained under this group is not limited. It would exclude all gifts received.

Earned property tax as a gift: Under this group, two cases exist:

Any cash received as an LTA for family travel by the employer is exempted from payment. For 2 trips (within India) over a period of 4 years, an exception can be obtained. Such a tax exemption is often referred to as the Leaving Travel Concession. exemption though provide the same effect as a tax-free income and is also treated somewhat similar, but an exemption is different as compared to tax-free income.

On interest gained on a saving bank account under section 80TTA, a deduction of 10,000 is authorized. The then finance minister initiated this in the year 2012. Notice that fixed deposit interest income would not benefit from any such advantage.

Interest on PPF and PF

Profit on contributions received from the provident fund for employers and the general provident fund shall be fully excluded from taxes. In India, the Public Provident Fund (PPF) was established in 1968 with the aim of mobilising small savings in the form of investment with a return. It’s also known as a savings-cumulative-tax savings investment vehicle because it allows you to create a retirement fund while lowering your annual taxes. The government’s maiden attempt to place part of PF earnings under the tax in 2016 met with heavy protests and had to be removed.

Dividend profits, such as a dividend received on shares or mutual funds, will now be taxable in the hands of owners, as per Budget 2020. Dividend Distribution Tax (DDT) is waived on dividends paid by companies, and the tax burden is now squarely in the hands of taxpayers. Taxpayers were historically expected to pay a 10% dividend tax only if the dividend earned exceeded 10 Lakh, and no tax was payable in the case of dividends received from mutual funds. Budget 2020, however, declared that the beneficiary of the dividend would be liable to pay tax at the income slab rates.

Any money earned to cover the cost of education as a scholarship is also tax-free in the hands of the person who gets the same under section 10. (16). Therefore, the government doesn’t need to fund such a scholarship to take advantage of this exemption.

Employees are privileged to take different kinds of leaves when representing a business, including medical leaves, casual leaves, and more. Few firms have the mechanism to encourage encashment of leaves that the worker does not take. The benefit received from the encashment of these accrued leaves on retirement by central and state government employees is tax-free. However, any amount charged for quitting encashment when working or employed in the private and corporate sector is entirely taxable.

To find more and understand the world of finance, investment and savings visit Dialabank.

✅What type of income is not taxable?

Some of the incomes not taxable are as follow:

✅How can I get Tax-free Income?

You can get Tax-free Income by availing of pension, gratuity, voluntary retirement scheme, perquisites, HRA, LTA, and leave encashment.

✅What is the amount of Tax-free Income?

According to new and old tax regimes, an individual’s income below ₹ 2.50 Lakh is exempted from tax. However, you can claim a tax rebate on income up to ₹ 5 Lakh and make it tax-free. To claim a tax rebate, ITR filing is mandatory for individuals with less than 60 years if the income limit exceeds the basic exemption limit of ₹ 2.50 Lakh.

✅What is the lowest tax threshold?

According to both the new and existing tax regime, the lowest tax threshold is above ₹ 2.50 Lakh to ₹ 5 Lakh, which attracts a tax rate of 5%.