Finance minister staves off any cut in the income tax rate

Finance minister staves off any cut in the income tax rate: 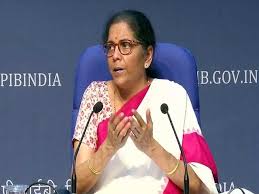 “We are not looking at any tax-related matter at this stage,” the finance minister said. She also said that the stimulus package announced by the government under the name Atmanirbhar Bharat Abhiyan will empower businesses to open up, which will then ensure workers are paid their wages. In an exclusive interview with CNN-News18, she said that the focus of the first package which was announced under the Garib Kalyan Yojana, which came just after the lockdown announcement was to ensure that no one goes hungry.

When the new package was ready to be revealed, the Prime Minister’s message was to be cautious not to abandon small businesses, the finance minister said, adding that the package offers regulatory support to ensure that citizens are not dragged into insolvency. Sitharaman said, “Some have suggested that money should be given directly to the poor, but I think this package announcement was the best way to support them,” on the issue of why the government did not prefer suggestions to put money directly in the hands of the people.

Demand, she added, is created not just when you and I go to purchase bare essentials.

“It is also the case when small units have to pay wages and fixed costs, companies open up and buy raw materials, payments made to wage earners who then make payments towards their bills and other things,” the finance minister said.

Finance Minister explained further that the stimulus package will have a chain reaction. Businesses will now start, it will be ensured that wages are now given to the workers. That is how they will have cash in hand, she said. She categorically rules out any cuts in personal or indirect taxes at present.”We are not looking at any tax-related matter at this stage”