Financing India’s Growth: What ought to be on policymakers’ minds

The economy of India is struggling from the aftershocks of the waves of the pandemic, with the possibility looming of the third wave. The policymakers have stepped up vaccination drives throughout the country but is that enough? What else ought to be on the policymakers’ minds? 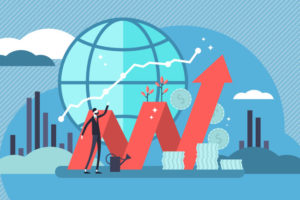 The biggest concern should be the finance sector in order to get India back onto a rapid growth path, which was last fully experienced in the early 2000s when India observed increased rates of savings and investment coupled with high growth.

However, these investments were not always productive or rather even safe due to a variety of problems. The majority of the frauds in financing have occurred since and there has been an increase in the bad loans ranging from banks to financial institutions.

All this resulted in a slow growth which caused the borrowers to come under stress. This led to the introduction and the implementation of the new bankruptcy law in 2016. The economy was further stressed when the demonetization and Goods and Services Tax Act, 2017 was introduced. The pandemic was simply the final stroke of the misfortune experienced by the Indian economy.

Harsh Vardhan, a member of Lok Sabha estimates that incremental business credit fell from 13% of GDP in 2011 to 3% in 2020, in a piece for ‘Ideas for India’. This 10% fall in credit in over a decade has come through a negative feedback loop involving supply and demand. Business credit must recover to ensure future growth.

The demand by the private sector may see a recovery in consumer spending but it will be accompanied by a robust fiscal stimulus. For supply, Harsh Vardhan notes the importance of improving the governance and risk management systems of the banks of India, along with providing capital to enable a bond market to expand its reach.

However, many more steps need to be taken to re-boost the economy. The top priority of policymakers ought to be a concerted effort to create and expand new platforms for business finance. In this regard, RBI has taken a few regulatory actions to enable technology-based solutions for small businesses for better financial intermediation.

The various past issues associated with public sector banks and with NBFCs were not the result of a lack of regulation but rather a lack of transparency and effective enforcement. To ensure intermediation of financing in India to shift from growth constraining to growth enabling, competitive technology-based platforms coupled with transparency in the system are crucial.

Transparency can be achieved through digital platforms which can be monitored aggressively by regulators and users alike as long as disclosure rules are well framed. The development of credit rating systems for businesses and individuals can also be increased via an effective digital ecosystem for financial intermediation.

To be able to access day-to-day operations for the resources needed for financing can also encourage small businesses to better their financing record keeping. The government policies have focused on the financial digitization of households of especially the poorest so that they can access savings and payment options which are comparatively cheaper to allow them to manage their finances better.

This is perhaps an important aspect of economic development. However, India’s growth will ascend only when all firms, no matter the size, can better access financial resources for daily operations and investments to achieve their growth trajectories. India has a decade-long credit collapse which can be attributed to deep structural problems with its institutions of financial intermediation.

There is, however, an urgency to recover quickly from the pandemic-induced economic crises which ought to encourage regulatory and policy innovation to catch up with the already occurred technological innovation.