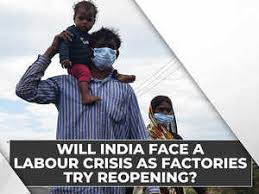 Factories and other establishments in some states may be allowed to cut salaries and initiate disciplinary action against workers who don’t report back to work within a specified period once the Covid-19 lockdown is lifted.
Labour department officials in states such as Gujarat, Madhya Pradesh, Karnataka, and Uttar Pradesh told that issuing such an advisory to factories in their states is being considered at the top levels to bring workers back. Gujarat, Madhya Pradesh, and Uttar Pradesh have loosened labour laws that will allow companies to hire and fire workers more easily as part of measures to make conditions for companies easier in order to restart economic activity.

“While an internal discussion is being held on these lines, a final decision will be taken if the lockdown is not extended beyond May 17,” said a top official in Gujarat’s labour department.

A directive, if issued, would be under the Factories Act, which covers any unit that employs 10 or more workers and uses electricity for production or employs 20 or more people with or without electricity.

Any circular would apply to all workers in relevant units and include migrant workers who may have either gone back home or are preparing to leave due to uncertainty over jobs and wages.