The world is going through a terrible phase which has reminded many types of efforts done by the government to bring improvement into the society and equilibrium, and that is only getting reminded a little bit due to which there will be an understanding that to what extent things were done and to what time people are contributing to that.

Under the scheme of Pradhan Mantri Shram Yogi Maandhan scheme where new enrollment of any person who is having the age of 60 or more and comes under the category of domestic workers with the pension of rupees 3000 as per the scheme which has been going towards a Negative Trend and has become so low in the involvement of the people that it will see zero in the chart. 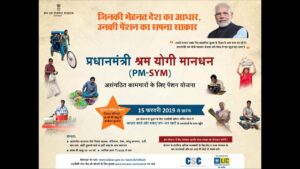 In the last two and half years, there has been an increase in the registration under which the pension covered the number of people around 10 lakh. Hence, growing in the default has been increasing the default when the time has come for a contribution from the side of the people.

In the interim budget of the Year 19-20, the finance minister of India, said that he got more than ten crores of workers, and the labourers will benefit under this scheme duration of 5 years. It can be said that people are not incentivized to continue with these kinds of payments.

Similar to the Pradhan Mantri Shram Yogi Maandhan scheme another scheme was named Pradhan Mantri jan Dhan yojana. Here, about 45,000 enrollments had done a few days before coming into effect on July 22, 2019. under this type of scheme, types of shopkeepers or retail traders will be benefited if you are having an annual turnover not exceeding more than 1.5 within the period of having age between 18 to 45 years.