The top priority for domestic container manufacturing base

For the next five years, the yearly container needs will be roughly 8,000. We have already launched a development order of 2,000 container manufacturing with BHEL and Braithwaite & Co, and they are currently being processed.

Despite a robust top line, your Q4 figures indicated a steep 92%  drop in consolidated profit. What do you think is causing the low profitability? 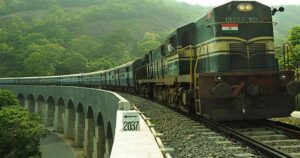 During the quarter, we experienced several one-time expenditures. The mechanism of charging the land licence fee (LLF) that the railways charge on us has changed.

Previously, LLF was charged on a per-container basis. The LLF rose from Rs 120 crore in 2019-20 to Rs 520 crore in 2020-21. Another one-time cost was the assets left over at the 16 terminals we handed over to the Railways. The asset value of the non-recoverable objects on those lands was about Rs 77 crore, for which we made a provision.

So, all told, the one-time charges for specific old lingering LLF issues, the write-off, and the discrepancy in our and Railways’ calculations amounted to Rs 280 crore, which we have budgeted for in Q4. This has resulted in a 92% decrease in Q4 earnings to Rs 24.97 crore.

What is the prognosis for the current fiscal year?

We anticipate a 12% rise in operating income this fiscal year. I am highly optimistic about a 100% increase because all one-time charges have been deducted from the bottom line. We are also nearing a long-term deal for the railway site, which will end the uncertainties surrounding the LLF. The goal is to take over 24 terminals on Railway land where Concor operates.

Concor will execute a 35-year leasing arrangement with the Railways for the use of land for 24 terminals. This is expected to cost the corporation around Rs 6,000 crore. We aim to raise Rs 3,000 crore as a loan with a cash position of roughly Rs 2,500 crore.

Are you on pace to begin container manufacturing in March 2022, as promised?

We will only choose six firms, with orders of 1,000 each. In two months, everything will be more transparent. Concor is India’s largest container procurer. Therefore we decided to establish a container manufacturing base there.

What other fresh initiatives are there?

We’re taking our time with growth plans since divestiture is on the table. Concor dabbled in coastal freight but had to abandon it because of legal issues. We intended to transfer goods in bulk in containers and are doing it with cereal grains. The objective is to begin moving cement in tank containers in six to eight months. We also wanted to start using Flexi bag containers and are already testing them. There is also the intention to enter the distribution and logistics industry, which we stated and for which certain people have expressed interest.

How significant is the latest extension of rail freight tariff benefits?

In recent months, there has been a favourable increase in exports and imports, resulting in a scarcity of empty containers to meet export demand. To help exporters reduce product export costs, we launched a program on April 1, 2021, to provide a 50% discount for empty container transportation between the port of entry and the inland container yard. From the company, the container station and the sideline. Because it has been so popular and profitable, we have decided to prolong it through March 31, 2022.