What is a Ration Card?

Users get subsidised food, grains, kerosene, and other essentials by using a Ration Card, a government-approved document. The ration card has proven to be a lifesaver for those who are not financially stable or fall into the BPL category and have difficulty affording food. 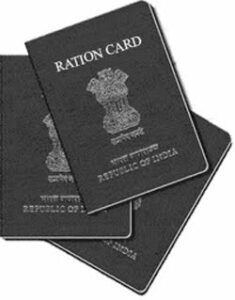 Aside from that, a ration card serves as identification and address proof and can be used to apply for things like a domicile certificate or voter identification.

What are the documents required for Ration Card?

How to Check Status of Ration Card?

Visit your state’s Food, Civil Supplies, and Consumer Affairs Department’s official website. Enter your credentials and log in. You will be able to check the status of your ration card application once you have logged in.

How to check E-Ration Card?

✅  In India, who is eligible for a ration card?

Anyone who is a genuine Indian citizen can apply for the Ration Card. Minors, or children under the age of 18, are covered by their parents’ cards. Individuals over the age of 18 can, however, apply for a separate ration card.

✅ What is an APL ration card?

APL (Above Poverty Line) ration card – The APL ration card is given to families who earned more than the poverty line.