Prime Minister Narendra Modi has originated the physical distribution of property cards under “SVAMTIVA” (ownership) scheme via a conference on Sunday. Narendra Modi said that it was a historic move towards a self-reliant nation. 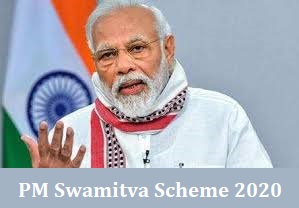 PM SVAMITVA Scheme: A step towards enhancing the standard of living of people in rural areas

In the Survey of Villages and Mapping with Improvised Technology in Village Areas (SVAMITVA) scheme, the beneficiaries will have a legal document of owning their lands. They can download their property cards by sending an SMS further which the physical distribution of the cards by their respective governments will be followed.

It was a great move taken by the Prime Minister to facilitate villagers and use the property as a financial asset for taking loans and other financial benefits.

“The beneficiaries now will have a right, a legal document of owning their houses. The country has taken another major step towards an AtmaNirbhar Bharat, as this scheme helps in making rural India self-reliant,” Mr Modi said at the video conference event.

The Prime Minister mentioned that 100,000 beneficiaries from Karnataka, Haryana, Madhya Pradesh, Maharashtra, Uttarakhand and Uttar Pradesh (UP) have been handed over the legal papers of their homes and ensured to give such property cards to every household in the following three-four years in every village of the country.

These recipients are from 763 villages across six states, including 346 from Uttar Pradesh, 221 from Haryana, 100 from Maharashtra, 44 from Madhya Pradesh, 50 from Uttarakhand, and two from Karnataka.

After receiving the cards, it will enable the beneficiaries to avail loans from banks against their property or house. Also, are a great way of solving land disputes among villagers. Drones were used in mapping and survey the properties of the villagers and also the records for the same.

This scheme will also set and organise village management for Panchayats, just like Municipal Corporations.

This scheme has been initiated to make the rural people “atmanirbhar” which means self-reliant. Following the Covid-19 pandemic, Atmanirbhar Bharat Abhiyan translated as self-reliant or self-sufficient India is a vision of our prime minister in making people and the country an essential part of the economy.