What is indirect tax?

Manufacturers pay indirect taxes to their country’s government. Ultimately, the end consumer is responsible for paying taxes, as they are buying the products. Materialistic commodities are taxed, as opposed to direct taxes.

The Indian government levies many indirect taxes. There are taxes on the manufacture, sale, importation, and even the acquisition of goods and services, among other things. But they’re more like instructions and circulars than actual laws. As a result, determining the exact nature of indirect taxes in India can be difficult.

To make indirect taxes more efficient, the Goods and Services Tax was introduced (GST). Please read on to learn more about indirect taxes and where they apply from a consumer’s standpoint. 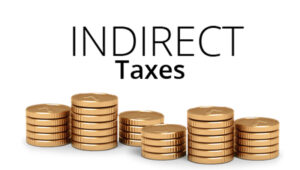 This tax is levied in exchange for the service the entity provides, and it is collected and paid by the Government of India. When a company in India manufactures a product or good, the excise duty is levied on it. The manufacturing company pays the excise duty on the goods and, in turn, recovers the amount from their customers.

Indirect taxes have some essential characteristics:

The following are some of the drawbacks of indirect taxation:

✅ Is Indirect tax subject to change?

Direct taxes, on the other hand, aren’t as flexible as they used to be. As a result, the government of India can decide to raise or lower tax rates based on the economy and other variables.

✅ Will I have to pay indirect tax if I buy a ticket to a cricket match?

Purchasing tickets to a cricket match will incur Entertainment Tax. But it will be covered by the GST.

✅ I’m going to India, and I’m bringing some cuisine with me. Will I have to pay customs duties?

As long as the food is intended for personal consumption, you won’t have to pay customs duty—food costing up to Rs. 12,000 would not be subject to customs duty.